Reception of the Visiting Research Fellow（Rafiani）

RIHN is currently receiving a Visiting Research Fellow as follows.

She holds a Ph.D Degree in Environmental Science and Engineering from Yamaguchi University, Japan on 2012 and then continued her work as a local government officer in Bengkalis Regency until now. Currently she is a Head Division of Environmental Governance, at the Environmental Agency of Bengkalis Regency, Indonesia. She is interested in the research related to the protection and management of peatland ecosystem because the area of Bengkalis Regency mainly consists of peatland, and degraded peatland has become their major environmental issues from year to year. The Government of Indonesia has sought to develop policies to curb the peatland fire and rehabilitate the degraded peatland but still face a number of obstacles.

During her stay at RIHN, she is working on the project entitled Toward the Regeneration of Tropical Peatland Societies: Building International Research Network on Paludiculture and Sustainable Peatland Management (Leader: Assoc. Prof. Osamu Kozan). Through 3 months stay at RIHN, Kyoto, she wants to identify the implementation constraints of government policies and improve the policies so that the rehabilitation of the peatland along with the development of local economies could be successful. She also expects that an opportunity will be open to share/exchange ideas and experiences between related stakeholders. 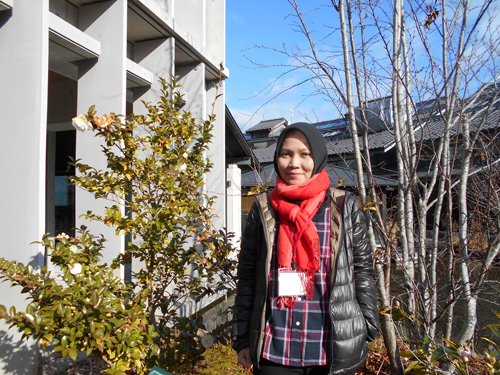