“Including Future Generations in Discussions on Sustainability” 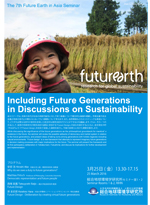 “Why do we owe a duty to future generations?”

Hiroshi Abe is Associate Professor of Philosophy and Logic at the Graduate School of Human and Environmental Studies, Kyoto University, in Kyoto, Japan. In 1999 he received his PhD in philosophy from Kyoto University. In 2011-12, he was a research fellow of the Alexander von Humboldt Foundation. His publications include “From Symbiosis (kyôsei) to the Ontology of ‘Arising Both from Oneself and from Another (gûshô)’” in Environmental Philosophy in Asian Traditions of Thought (SUNY Press, 2014) and “Umweltethik im modernen Japan [Environmental ethics in modern Japan]” in Begriff und Bild der modernen japanischen Philosophie (frommann-holzboog, 2014).

In this presentation, unlike the majority of environmental scientists and specialists, I would not like to talk about how to protect future generations, but why we should care about them. This is because, if there were no good reason for justifying our responsibility towards them, i. e. if we did not necessarily have to owe future people, then all of the how-to researches on protection of them would not make sense fundamentally. Hence, I shall critically review some significant arguments that try to lay, albeit respectively in different ways, the philosophical groundwork for mankind’s existence in the future.

Matthias Fritsch is Professor of Philosophy at Concordia University, Montréal. He has published a monograph (The Promise of Memory), a range of articles in scholarly journals, co-edited two anthologies, and translated authors such as Heidegger, Gadamer, and Habermas into English. He has been a Humboldt Fellow in Frankfurt and at present is Visiting Research Professor at Kyoto University, where he is working on a book manuscript (for which he has been awarded federal Canadian funding) on intergenerational ethics and politics. A second project develops a concept of deconstructive normativity in relation to metaethics, biopolitics, and environmental philosophy.

This presentation will review various proposals that have been made by political theorists as to how best to represent future people in democratic decision-making. Before this review, I will discuss the reasons for holding that liberal-capitalist democracies are inherently presentist, that is, favour the currently living at the expense of the mid- to long-term future. I will then present some ideas of my own as to how to reconceive democratic institutions in the face of increasing responsibilities for future people. These ideas revolve around the idea of taking turns among generations with holistic and encompassing legacies, such as traditions, institutions, and natural environments.

Tatsuyoshi Saijo is a Professor at the Institute Economic Research, Hitotsubashi University. He was a Professor in the Research Institute for Future Design, Kochi University of Technology and a Professor at the Institute Social and Economic Research, Osaka University. He received a Ph.D. (Economics) from the University of Minnesota. He is specialized in Institutional Design and Public Economics. He advocates for "Future Design," which incorporates "imaginary future generations” in the design of current and future social systems. He explores the theory and is engaging with the experiment and practice for the "Future Design."

Keishiro HARA is an associate professor at the Center for Environmental Innovation Design for Sustainability at Osaka University. He works on sustainability science and environmental management, both in a local and global context. Most recently, he has been engaged in projects and research related to “Future Design.” He is the principal investigator of project “Planning and Research for Future Design Method: Deliberation with Virtual Future Generations” (FY2015), supported by Japan Science and Technology Agency (JST), RISTEX. He holds bachelor in Engineering and Ph.D. in Environmental Studies, both from the University of Tokyo.

My talk will briefly introduce the first attempt of participatory deliberation under the concept of Future Design, which has been carried out in a local municipality in Japan over the past year. In the Future Design concept, present generations and virtual future generations who are tasked to represent and speak for future generations are to negotiate to overcome conflicts over priorities and values. I will present some of the preliminary results obtained from the deliberation processes in Yahaba town of Iwate prefecture, in which groups of present generations and virtual future generation first came up with ideas for vision settings for Yahaba town in 2060 individually and both groups then attempted to negotiate to overcome possible conflicts. A stark contrast was observed between the groups particularly with regards to the way of thinking and priorities in values. Though such deliberation practices have just begun and accumulation of case studies are awaited, I will discuss some implication derived from the practices in Yahaba town to develop the concept and implementation of Future Design in real world.