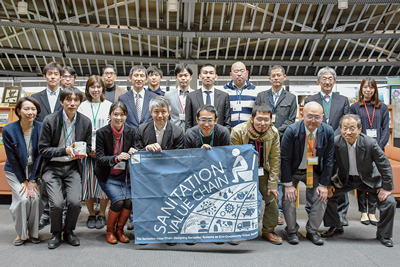 Prof. Taro Yamauchi is a professor at the Faculty of Health Sciences, Hokkaido University. He has a B.S., a M.S. and a Ph.D. in Health Sciences from the University of Tokyo. He does intensive fieldwork in hunter-gatherer society, rural villages, and urban slums in developing counties to understand the lifestyle and health of local populations and adaptation to living environments. His research interests also include sanitation and participatory action research involving local children, youth and adults. He is Vice-President of the International Association of Physiological Anthropology (IAPA) and an executive member of the International Society for the Study of Human Growth and Clinical Auxology (ISGA).

Sanitation generally refers to the provision of facilities and services for the safe disposal of human urine and feces. UN Millennium Development Goals Report 2015 reported that 2.4 billion people are still using unimproved sanitation facilities, including 946 million people who are still practicing open defecation. The developing world still has high under-five mortality and poverty rates. The world’s population is estimated to reach approximately 10 billion in 2050, and this population growth will happen mostly in developing countries. At the same time, depopulation and aging are increasing, especially in the rural areas of the developed world, and the financial capability of many local governments—which are key agents in the management of sanitation systems—is getting weaker.

Sanitation systems are essential for promoting public health, preventing environmental pollution, conserving ecosystem functions, and recycling resources. The question of how to handle the waste of 10 billion people is therefore highly relevant to the global environment.

Working hypotheses of the research

The project investigates the following hypotheses:

Hypothesis 1:Current sanitation problems are caused by a dissociation between the value which is provided by the sanitation system and the values of the individual people and/or the community of the people.

The project proposes a new concept, the Sanitation Chain, which has the following dimensions:

Goals of the project

The goals of this research project are to: 1) Propose the concept of Sanitation Value Chain in relation to both developing and developed countries; 2) Design several pilot studies demonstrating the significance of societal, academic, and professional involvement in the co-creation of this value chain; and 3) Contribute to the establishment of a new interdisciplinary academic foundation on sanitation.

Research topics for achieving the goals

Life: By field survey, we learn about the values of people and the norm for human excreta, and reevaluate the sanitation system in relation to the residents lives.

Technology: We identify prerequisites of sanitation technologies and reevaluate the value that sanitation will give us. In addition, we develop new sanitization technology to make use of the value chain by understanding the values of people and local conditions.

Co-creation: We identify stakeholders and describe the value structures of people and communities, and analyze the hierarchy and structure of stakeholders’ value chain and evaluate their affinities. We demonstrate the co-creation process of the sanitation value chain.

Visualization: In order to co-create the value chain, it is necessary to make efforts to communicate research results to actors and stakeholders. Utilizing resources and institutional collaborations of RIHN, we will develop a method to express and transmit outcomes using various media.

How we think about sanitation

We involved multidisciplinary experts and have created a framework of understanding to capture sanitation problems as not only material cycling, but as a whole of the value of sanitation in health and wellbeing, materials, and socio-culture (Figure1). Based on the framework, we will uncover values embedded in societies and cultures, and co-create the Sanitation Value Chain by cooperating with various actors related to the sanitation system. We envisage that Sanitation Value Chain system will improve the health and wellbeing within the community.

Toilet for recycling resources. We have developed functioning toilet technologies necessary for the sanitation value chain by making urine in the urban area valuable as fertilizer. These are the “Toilet that can concentrate urine” and “Toilet that can make phosphorus fertilizer”.

Tracking propagation of pathogens. Pathogenic bacteria propagate through various routes. We have developed a molecular biological method of tracking this propagation. In the case of Bangladesh, we found that the most important route of pollution is bathing, and the contamination of drinking cups is more important than of the water itself (Figure 2).

Establishment of “Children and Youth Club” and implementation of action research. In the peri-urban areas of Lusaka, the capital of Zambia, we established a group called Dziko Langa (My Community) and conducted action research. Children and youth drew pictures and took photographs of scenes considered as community problems related to sanitation, giving explanatory narratives of their work (“Arts-based” and “PhotoVoice” approaches). The groups then held open sanitation exhibitions in their communities. Through these activities, we were able to clarify community sanitation challenges and to discuss problems with community residents.