RIHN 13th International Symposium
Humanities on the Ground: Confronting the Anthropocene in Asia 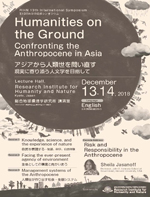 Initially formulated to indicate humankind’s total impact on the global environment, the concept of the Anthropocene draws all humanity into Earth history. Especially in the modern period of dramatic human-environmental change, it distinguishes the Earth as a grand collective project and problematic, so appearing to justify and legitimize a new round of techno-scientific management of the ‘Earth System’.

At the same time, the ‘environmental crisis’ has also been called a crisis of culture, and thus of imagination. In this sense, it begs the attention of the humanities, which have always been concerned with the human experience, even as it challenges their underlying assumptions and practices.

This symposium engages the three-part challenge facing humanities scholarship today: the need to expand beyond Western narrative/disciplinary super-structures—in which human separation from nature is a fundamental component—and to simultaneously address ‘alternative’ subjects and societal experience and the role of environment and nature itself as constituent element in this experience.

In this sense the Anthropocene concept—useful now as it encapsulates in a single word the grand theoretical tradition that has so defined Western understandings of modernity and nature itself—must be taken down to the ground, to the lived experience that composes the long cultural-ecological histories of Asia.

The Anthropocene therefore presents an epistemological problem that, if taken seriously, is also ultimately an ontological opportunity. The question of the knowledge that is considered legitimate and relevant now as human societies face rapid social-ecological change is linked so closely to particular cultural understandings of the agencies that constitute the known world. How to see such knowledge, cultures and ecologies in themselves as agents that indeed have also created the Earth?

This symposium asks humanities and interdisciplinary scholars how to re-conceptualize the significance of the humanities now, in light of the history and modern day contexts of Asia, in which humankind’s inevitable experience has formed part of an always dynamic, yet changeable nature.

Session 3: Management systems of the Anthropocene

Final Session: Discussion across all sessions