A new tracking method of the ocean migration of chum salmon using a combination of retrospective isotope analysis and spatial distribution of isotope ratios (Isoscape) has been developed.

The isotope tracking successfully reproduced a known chum salmon migration route between the Okhotsk and Bering seas, and our findings suggest the presence of a new migration route to the Bering Sea Shelf during a later growth stage.

This method can be used in various highly migratory marine animals in the North Pacific.

Dr. Jun Matsubayashi and Prof. Naohiko Ohkouchi of the Japan Agency for Marine-Earth Science and Technology (JAMSTEC), Dr. Yutaka Osada of the Graduate School of Life Sciences, Tohoku University (current affiliation: Japan Fisheries Research and Education Agency) and colleagues developed a new analytical method to track the ocean migration of individual salmon using a combination of retrospective isotope analysis and spatial distribution of isotope ratios (we refer it as “Isoscape”).

Salmon have long fascinated people by their interesting migration ecology and their ability to serve as food resources. Most anadromous salmon species migrate to the ocean for several years and then return to their natal streams (Fig. 1). The total distance of their journey sometimes surpasses 10,000 km. However, in many cases, the purpose and destination of their long journey in the ocean is still steeped in mystery due to the difficulty of tracking them in the ocean. 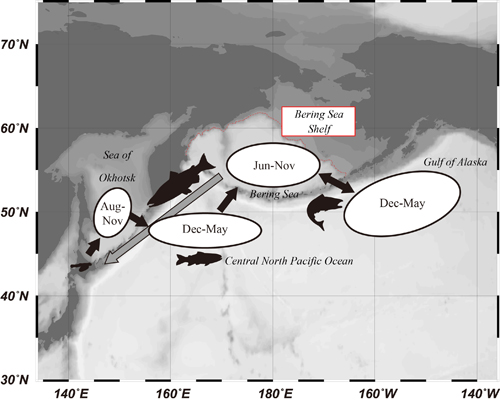 Here, we developed a new method to track the long-term migration of salmon using isotope analysis. The chemical environment of a habitat in which a fish has habituated in the past is recorded in the incremental growth of hard tissues, such as the vertebral centrum and otolith (Fig. 2). Among them, the vertebral centrum is a useful tissue to reconstruct the retrospective stable nitrogen isotope ratio (15N/14N), which has substantial variation among geographic locations. Therefore, a combination analysis of the spatial distribution of stable nitrogen isotope ratios (isoscape) and retrospective isotope analysis of salmon can be used to reconstruct their migration routes. 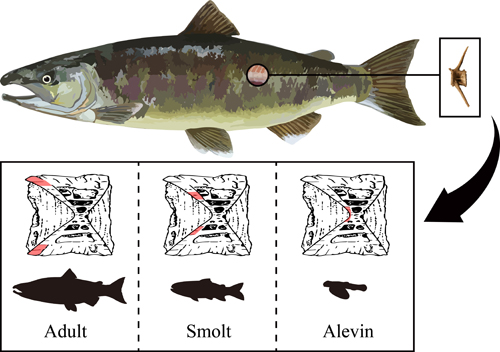 We initially generated the isoscape of stable nitrogen isotope ratios in the northern North Pacific by conducting compound-specific isotope analysis of amino acids from copepods sampled across the region (Fig. 3). Then, we performed retrospective stable nitrogen isotope analysis of mature chum salmon sampled from three different streams in Japan. Finally, we estimated the migration routes of individual salmon by using a state-space model that could incorporate the isoscape and retrospective isotope shifts of salmon (Fig. 4). 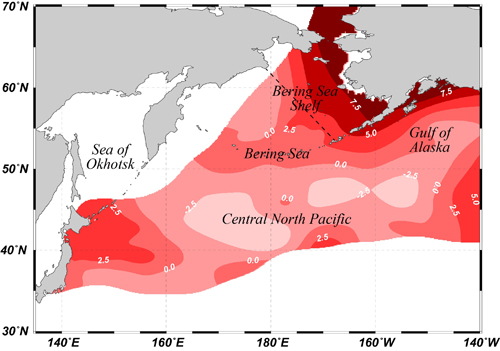 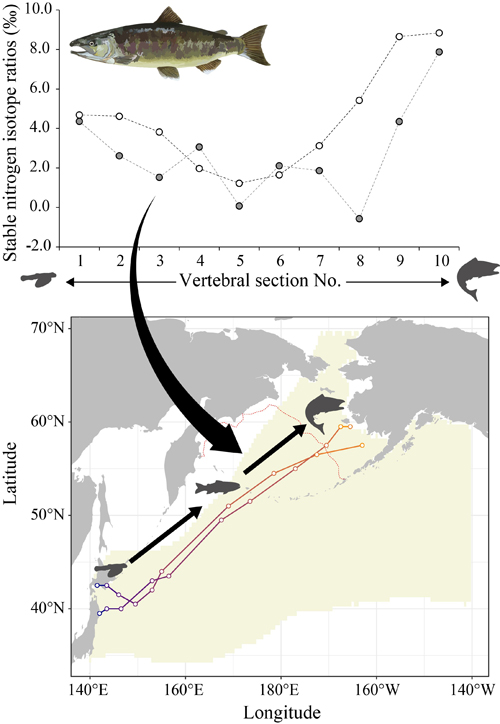 Fig. 4. Retrospective stable nitrogen isotope ratios of individual salmon (upper graph) and estimated migration routes of these salmon (lower map). All salmon shared a common trend to show the highest isotope ratios at the outermost section of the vertebral centra.

The isotope tracking method successfully reproduced a known chum salmon migration route between the Okhotsk and Bering Seas. Furthermore, our findings suggested the presence of a new migration route to the Bering Sea Shelf during a later growth stage, and this stage corresponds to the timing of sexual maturation of this species. For this reason, our results suggested that the destination of ocean migration of chum salmon is the continental shelf of the East Bering Sea, and they can fulfill the nutritional demands of sexual maturation by feeding in this highly productive region. It is worth noting that the isoscape data and isotope tracking method presented in this study can be applied to many other marine animals that migrate to the northern North Pacific.

The study was published in international journal Ecology Letters on 25 March 2020 at 12:00 (JST).

Chum salmon (Oncorhynchus keta) is a popular food, but this species has also fascinated many scientists due to its unique ecological traits of migration. Just after their eggs hatch in streams, chum salmon initially run down to the ocean. Then, they move around the east Bering Sea and the Gulf of Alaska to grow for 3 to 4 years, and finally, mature salmon return to their natal streams. Although several studies have investigated the seaward and spawning migration of salmon species, the migration of salmon in the ocean, where they spend most of their life, has rarely been investigated due to the difficulty of tracking the migration of marine animals.

In the case of Asian populations of chum salmon, a research project conducted in the late 20th century investigated their migration routes by extensive fishing surveys in the North Pacific. The research project revealed that chum salmon initially run to the Okhotsk Sea after seaward migration; then, they move to the Bering Sea and come and go between the Bering Sea and Alaska Gyre in summer and winter, respectively, for several years. Finally, mature chum salmon return to Japan from the Bering Sea around ocean age 4 (Fig. 1). However, this migration route does not provide an answer to the question of why most salmon go to the Bering Sea, which is no less than 3000 km from Japan. We believe that individual variations in the migration routes of the salmon provide an important key to answer the question because if there is a destination of the ocean migration of the salmon, the habitat should be shared by many individuals with an important growth stage, such as the period of sexual maturation.

To develop a new analytical method to evaluate the migration route of individual salmon and to reveal the destination and purpose of ocean migration of chum salmon, we focused on the stable isotope tracking method. Although stable isotope analysis is often used in ecological studies to estimate the diet or nutritional pathway in certain food webs, it can also be applied to investigate the migration of animals if certain requirements are met.

Generating a distribution map of isotope ratios (isoscape) in the potential habitat of target animals is an essential prerequisite to apply isotope analysis for migration studies. In this study, we generated an isoscape of the stable nitrogen isotope ratios of phenylalanine, which exclusively reflects the spatial variation in the isotope ratios, but is not influenced by the trophic position of organisms, via compound-specific isotope analysis of copepods sampled from multiple points in the North Pacific (Fig. 3).

Finally, we developed a new statistical model to estimate the migration route of individual fish by incorporating the isoscape and retrospective isotope ratios of salmon. Using this model, we estimated the migration routes of individual chum salmon. The isotope tracking successfully reproduced a known salmon migration route between the Okhotsk and Bering Seas (Fig. 4). In addition, we suggested the presence of a new migration route to the continental shelf of the eastern Bering Sea during a later growth stage. The later stage of skeletal growth of salmon corresponds to the timing of sexual maturation of this species. For this reason, our results strongly suggested that the Bering Sea Shelf is a destination during the ocean migration of chum salmon, and they can fulfill their nutritional demands of sexual maturation by feeding in this highly productive region.

On the other hand, isotope tracking did not indicate migrations between the Bering Sea and the Gulf of Alaska or homing migration from the Bering Sea to the Japan coast, both of which were presented in existing research. This result is because salmon do not exhibit substantial skeletal growth during their life in the Gulf of Alaska and homing migration. The Gulf of Alaska is a winter refuge for salmon, and their skeletal growth should be slow during this period. Similarly, fishes that die just after spawning, such as salmon, tend to moderate their growth after sexual maturation. Thus, we suggest that isotope chronology recorded in vertebral bone exclusively reflects the isoscape of the foraging habitat during skeletal growth.

The results of this study suggested that the Asian population of chum salmon strongly depends on nutrients in the Bering Sea Shelf far from Japan. It anticipates that monitoring and management of the environment of their habitat while traveling in the ocean as well as their natal river and coastal area are important for the sustainable use of salmon resources.

The isoscape of the stable nitrogen isotope ratios generated in this study can be applied for isotope tracking of various animals that migrate to the North Pacific Ocean. Hence, the method of this study will strongly promote the future use of isoscapes for migration studies of marine animals. Specifically, we are interested in the migration study of other salmon species or other populations of chum salmon. Although the Bering Sea Shelf is an important habitat for the Asian population of chum salmon, salmon from other regions, such as North America and Russia, may have completely different migration routes. Furthermore, thorough investigation of the migration routes of salmon species in the North Pacific would provide information about inter-species interactions of this taxon, such as how these species differentiate their habitats and which species are competitive with each other.

It is also important to expand the applicability of the isotope tracking method. For this reason, we are trying to generate global isoscapes of stable nitrogen isotope ratios and other additional isotope elements so that isotopic tracking is applicable for many highly migratory animals in the world’s oceans.